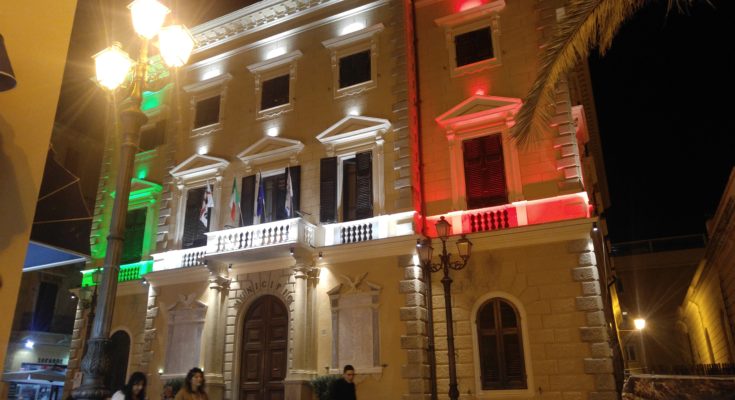 Voice of the Narrator (who sounds remarkably like William “Bill” Conrad): “Last time, you remember, our hero was waiting for the local police to arrive at his apartment to verify that he actually lived there. They needed to do this because he had applied for residency in his new town of La Maddalena, and this police check was part of the process.

“Just after the closing theme and the running of the closing credits for that episode, the police finally did show up, asked a few questions, filled out a form, and left. At this point, he anticipated that the process was off and running, and that it would conclude fairly quickly…..”

Boy, was I wrong. Instead of concluding the process fairly quickly, the police visit was simply one more slow step in the bureaucratic bog.

About a week after the police left, I received an email from the company which is shipping our things here from the United States. In order to clear customs without any import fees, they needed verification that I was an Italian citizen moving to Italy from the U.S., and taking my personal possessions with me — not simply moving from one Italian city to another, and importing a bunch of stuff from the U.S. The lady said I could send her my residence certificate for this purpose. I told her I didn’t yet have the residence certificate, but I had the application. She said that might suffice.

Unfortunately, when I took out my copy of the application to scan it and send it to her, I noticed what I thought was a mistake: it seemed to me that, at the top of the form, the wrong box was checked. My Italian is still non molto buono (not very good), but the form seemed to be saying that I was moving to La Maddalena from another Italian town, and not that I was registered in the list of Italians living abroad (AIRE) and moving here from another country. I decided I’d better take the certificate back to the municipio (city hall) and see if they could correct it.

The next morning, I visited the city hall. The Anagrafe (registry) clerk I had spoken with before looked at the certificate and told me it was correct. (The conversation, of course, was in my very rudimentary Italian — we “mostly” understood each other, but I got the gist of what he said.) With this reassurance, I went home and emailed a copy of the certificate to the shipping lady.

She responded to me and told me that the application said exactly what I had thought: that I was moving from one Italian town to another. (Gee… my Italian must be better than I give it credit for…) She suggested I go to the city hall and have them correct it.

Okay, we’ll try this again. I was hoping I could talk to someone different, because I didn’t want to make myself appear to be a nuisance to the guy I had been badgering up to now. When I arrived, I did get to talk to someone else, even though my guy noticed me and chimed in from across the room once or twice.

This conversation — again in my very broken Italian — went on for about an hour, and ended up involving four different people in the Anagrafe office, along with a phone call to Rome to speak with the lady at the shipping company. The upshot was: The application is correct. As far as the officials in La Maddalena could tell from their computer system, I was a resident of Giusvalla, which is the Italian town my paternal grandfather is from. My birth in 1954 was registered there. My marriage in 1987 was registered there. As far as they were concerned, I had lived in Giusvalla all my life — despite the fact that I have never yet set foot in that town.

They admitted that this was a legal fiction. My birth and marriage were registered in Giusvalla, my ancestral Italian comune, when my citizenship was recognized by the Italian consulate in Houston in 2016 — this is what the law requires, and they understood that. But they said that only Giusvalla could officially inform them that I was not actually a resident, but was instead registered in AIRE — the list of Italian citizens living abroad. The office in La Maddalena could not make that change on its own.

The real problem, they explained, was that Giusvalla had not yet responded to their requests for information about me. My guy, Giovanni, had tried to call them the first time I had filled out the application, while I was sitting at his desk. There was no answer and no voicemail. The lady I was speaking to this time also tried to call them, again while I was sitting right there — three times — with the same result. I assume they had also emailed or something similar in the meantime, because everyone said that Giusvalla had not “responded” — which implies that La Maddalena had reached out to begin with.

The upshot was that our remaining belongings were steaming their way across the Atlantic, on the verge of arriving in Italy, and I had no proof for Italian customs that I had just come to this country from the U.S. If I could not produce such proof, I would be subject to customs duties of some as-yet unknown amount on all of our possessions.

In addition, regardless of any customs duties implications, this delay was holding up the entire process of my gaining official residency — which I needed for health care (prescriptions are running out!), Vicky’s permissions to stay as a non-citizen spouse, and other things.

And on top of everything else, the lady I was dealing with at the shipping company — who could help get me through the process — was about to go on vacation for a week, and so would be unavailable for consultation or advice in a couple more days.

But at least now I understood where the bottleneck was. The shipping lady suggested I request a specific form from the Houston consulate, which might circumvent the delay from Giusvalla. The consulate informed me that, since I no longer live in the U.S., they could not provide me with that form. They suggested I contact Giusvalla and request a different form.

Apparently all roads led to Giusvalla…

I emailed the Anagrafe office in Giusvalla, telling them that the consulate suggested I request a Certificato di Iscrizione AIRE (Certificate of Registration in AIRE) and explaining that I was establishing residence in La Maddalena. This was on Friday, September 7th. Saturday — no response, despite the fact that the comune website said the office had hours that day. Sunday, no response. Monday, no response.

I did not want to telephone the office because I didn’t consider my Italian to be good enough to explain what I needed. But I had to do something to prod the process along.

Giusvalla is a tiny town of some 450 residents in northern Italy. They have a Facebook group, where many residents, non-resident descendants like myself, and town officials share local news and chatter. I decided to post an inquiry in this group as to whether the Anagrafe office responded to emails. I said that my Italian was not good enough to feel comfortable telephoning.

I made this post Monday evening. On Tuesday morning, my phone rang. It was the lady from the Anagrafe in Giusvalla, speaking Italian — a bit too rapidly for my ear.  Still, we managed to communicate, and she explained that she was going to try to call La Maddalena to give them the information they required. I thanked her profusely and hung up.

About 15 minutes later, my phone rang again. This time it was the Anagrafe in La Maddalena — the lady in the office who spoke a bit of English. She told me (in English) that Giusvalla had just called and was sending them the information they needed to process my residency, and that I could stop by on Friday to pick up the papers.

Success at last? We’ll see on Friday (today is Wednesday).  Hopefully the paperwork will then state that I am moving here from Texas, rather than from Giusvalla.  And if we’re really lucky, I will receive my carta d’identità (identity card) — the official acknowledgment of my residency in Italy, which completes this process and places me firmly within the Italian system.

Of course, at that point we simply move into more bureaucratic processes: registering for the health care system, registering Vicky as the non-citizen spouse of an Italian citizen living in Italy, transferring Vicky’s application for citizenship from the consulate in Houston to La Maddalena…

All of these things require more visits to government offices, more filling out of forms, probably more waiting and delays…

After my hour-long meeting at the Anagrafe office the other day, one of the ladies looked at me sympathetically, shook her head, and sighed, “Burocrazia…”

Update, Friday, September 14: As requested, I went down to the Anagrafe this morning. After waiting outside in line for about a half-hour, I was told that Maria — who is apparently the only person here who can handle my paperwork?? — did not come into the office today, so I will have to come back on Monday. Sheesh….