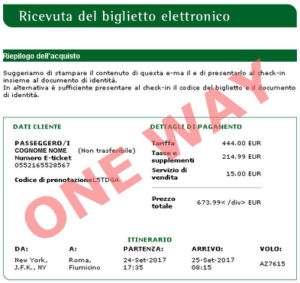 As I have gone through the process of claiming my Italian citizenship and now moving to Italy, I’ve learned a lot of interesting things. Perhaps the most surprising one, to me at least, is the sheer number of people who are doing exactly what I’ve done: claiming their citizenship by birthright and then moving — permanently — to Italy.

I am in a Facebook group called “Americans Living in Italy.” That group currently has over 6,100 members. Not all of those members actually live in Italy, of course. But an ever-increasing number of them do. Whenever someone in the group makes a post which says something like, “We are leaving next Tuesday, wish us luck!” the entire comment thread is filled with replies like, “Next Tuesday? We’re leaving a week from Friday!” “We got here last week, loving it so far!” “Leaving in a month, as soon as we sell our house!” Etc. Etc. Etc.

In other words, LOTS of people are packing up and leaving the USA for Italy. A really surprising number.

In just this one Facebook group, I wouldn’t be surprised if  four or five people a month move permanently from the U.S. to Italy. And when I say “people,” of course, I really mean “families,” because relatively few of these people move alone. Many are couples, some are even families with children.

To me, that seems like a lot of people. Especially when you consider that this is just one small Facebook group of Italian-Americans. How many more Italian-Americans are doing this without sharing the news on Facebook? And how many more people, of Italian descent or otherwise, are moving out of the U.S. to Italy or to any other country?

I suspect what I see here is just the tip of a very large iceberg. And that one day, in maybe five years or so, you will wake up to news of a great exodus that’s been quietly taking place while no one was looking…