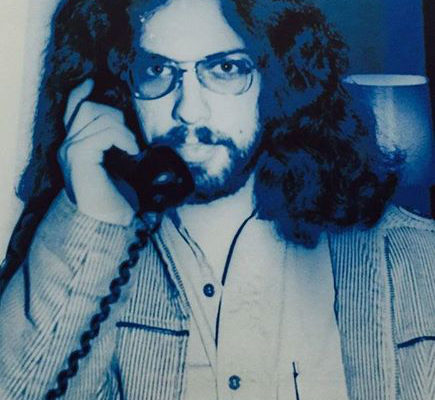 Capt. Eddie’s original adventures took place during a time when phones were plugged into the wall, when photographs were printed on paper and you had to pay for them, and when you got up and walked across the room to change the channel on the TV. And there were only three TV channels to pick from.

In other words, in The Good Old Days.

Well, I decided that some of these adventures are worth recording here as well, for posterity as they say. Because they are interesting or funny or things like that. And also so the grandkids can see what life was like in the Good Old Days and be jealous that they don’t have it so good. And, well… just because I like to talk about myself, I guess. And because I think for some odd reason that you might be interested in it when I talk about myself.

So… Where did Capt. Eddie come from?

In September of 1972, I began college at St. Joe’s and found myself, by the luck of the draw, thrown into a dormitory called Gandhi Hall. These dormitories had just been organized a few years before, and by some stroke of luck or fate or whatever, a bunch of kindred spirits had been tossed together into Gandhi.

In other words, I found myself in the right place at the right time, and I felt right at home.

Well, there was one guy in this dorm — we’ll call him Wonder Wop — who was fond of coming up with nicknames for everyone. And the thing is, his nicknames were pretty accurate, although sometimes in a backhanded sort of way, and so they stuck. So a good many of us in Gandhi Hall went by nicknames, rather than by our real names.

It was the early ’70s, after all, and the psychedelic era was still in full swing.

There was Wonder Wop himself (based on his Italian heritage). There was Wee Willie (who was quite tall), and his roommate Big Bob (who was rather short). There was Piece O’Shit, who got his nickname because he did something (I don’t remember what), and Wonder Wop laughingly exclaimed, “You little piece o’ shit!” So Piece O’Shit he became. My own roommate was The Stoned Ranger. And I, of course, was christened Captain Eddie.

Soon after the school year began in 1972, we had Gandhi Hall t-shirts made up. We had a cobra on the front, along with “Ghandi Indians” — yes, Gandhi’s name was misspelled, and yes, some brainiac came up with the idea to call us “Indians” without, I believe, asking anyone else first. To this day, I don’t know who to blame for either (although some rumors did float around the dorm at the time).

So on the front of the shirts we had this rather pathetic-looking display, as if we were so stoned we couldn’t even spell our own dorm’s name right. Hey… maybe that’s how… oh, never mind. And anyway, on the back we had our nicknames. Wonder Wop. Wee Willie. Big Bob. Piece O’Shit. S. Ranger. Capt. Eddie. And several others not quite as colorful as these.

So there we were, the Gandhi crew. Twenty-odd guys (yes, pun intended) with wacky t-shirts and a largely devil-may-care attitude, who were going to school and having a good time — not necessarily in that order. And Capt. Eddie assumed his place in this overall scheme of things: sometimes the focus, sometimes in the supporting role. “Sometimes the lights all shinin’ on me, other times I can barely see…”

In future installments, we’ll describe some of Capt. Eddie’s original adventures, both here at St. Joe’s where he got his start, and elsewhere.

6 Comments on “The Origins of Capt. Eddie”