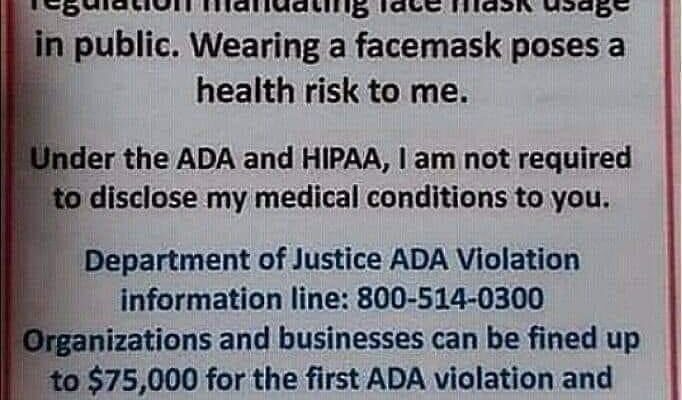 They say a picture is worth 1,000 words, and we’ll get to that in just a little bit. First, though, let me tell you a story about how some things went down here in Italy recently.

Early on in the coronavirus thing, Italy became one of the world’s hotspots. Cases here were surging. There were thousands of new cases a day. Hospitals were overwhelmed. Hundreds of people were dying — every day. It all seemed completely out of control.

Then, in mid-March, the Italian government implemented drastic, draconian measures. Basically, the entire country was put under house arrest.

You were not allowed out of your house without a valid, extreme reason.

Let me repeat that in case you missed it: Unless it was an emergency, or one or two other reasons allowed by the government, no one living in Italy was allowed to go out of their house. Period.

If you did go out, you had to bring a form with you, filled out and signed, that stated exactly where you were coming from, exactly where you were going, gave the reason you were out, and said that you were aware of the penalties for being out without a proper reason. Not having the form with you, or being outside for something other than one of the government-approved reasons, was grounds for arrest, fine, and/or imprisonment. The police did stop people and check them, especially in the big cities and the virus epicenters.

If you did go out, it had to be alone — only one person from a household at a time. Except for extreme emergencies, you could only go out once per day. You had to wear a mask. You had to stay at least one meter apart from anyone else. Only essential businesses could be open — grocery stores, pharmacies, a few others — and they had to limit the number of people entering at one time.

This last meant, for example, that if you went to the grocery store (or pretty much anywhere else), you had to wait outside in line — spaced apart, naturally — so as not to overcrowd the place. After a few people left, one of the employees would come to the door, open it, and call out, “Tre!” (Three!) or “Quattro!” (Four!) or whatever, and then allow that many more people in. Inside, you had to wear gloves as well as a mask. Many stores put up plastic barriers in the checkout lines, between the cashiers and the customers. There were markers on the floor to help you keep your distance.

Travel was not only prohibited internationally, but in addition you were not allowed to travel to another city in Italy, except for medical emergencies or if you worked in an essential business. You could not go visit your friends or your relatives. You could not go to church. Schools were closed. Hell, you could not even have a funeral for the people who died.

You were, for all intents and purposes, under house arrest. The entire country.

This all went on from mid-March to early May, almost two full months.

You freaking people whining about wearing a mask don’t have a clue what “lockdown” really means.

By and large, the people in Italy cooperated with these government mandates. We stayed inside. We only went out for approved reasons. We only went out one at a time, wearing a mask, keeping our distance. Then a couple of months later, a funny thing happened, which is where the “picture-worth-1,000-words” comes in.

This is a graph of the daily confirmed coronavirus cases in Italy and in the United States. For the moment, just look at Italy, the dark blue line. If you mouse-over the graph, it will show you the actual dates and numbers. Notice that the line climbs rapidly during March, reaching a peak of over 6,000 cases in a single day on March 22 — about a week or so after the lockdown went into effect. Then the line starts dropping. By early June, there are less than 500 new cases per day. By July, less than 200.

In early May, with the line now on a steady downward course and lower than it had been for months, the Italian government began relaxing the lockdown restrictions, little by little. By the end of June, guess what? Life was almost back to normal. Yes, you still have to wear a mask inside a public place, like a restaurant or grocery store. But — our restaurants are open. Our bars are open. Our shops are open. People can go back to work. People can walk the streets in pairs or in groups. And, most importantly, people can enjoy themselves and feel like normal people again.

Look at the brown line on the chart. That line shows new daily cases of coronavirus in the U.S. When Italy went into lockdown in mid-March, we had almost 10 times as many daily cases as the U.S. But then we went into real, honest-to-goodness lockdown — national house arrest — like I described above.

You guys whined about wearing a mask and that you couldn’t go to the beach for spring break. And then you went to the beach anyway. You held big protests complaining that making you wear a mask violated your civil rights. You whined and complained, egged on by your so-called “leaders.”

On March 22nd, the day that Italy was reaching its peak of daily new cases, the U.S. was just getting warmed up. You placed a few restrictions — if you can call them that — maybe slowed things down a little bit, bitched and whined some more, let your idiot president turn wearing or not wearing a mask into a political statement, quickly rolled back the few restrictions that you had, and then you were off to the races.

The U.S. does everything bigger — well there you go. Check out that curve that you guys have. Big as all get-out.

I hope you’re proud of yourselves.

Keep on whining. You can whine all the way to the cemetery.

We in Italy all stayed inside our houses for two freaking months because… well, because it was sensible. And our leaders explained to us why it was sensible, rather than serving as Chief Whiner and undercutting the people who know how to handle these things. And now, having done the sensible thing, we are almost back to normal.

Update, November 14, 2020: Well, “almost back to normal” didn’t last particularly long for anybody, did it? The past couple of months has seen a fresh surge in cases around the world. A couple of weeks ago, Italy has reimposed strict restrictions, although a bit short of the total lockdown we had in the spring.

The U.S.? Same-old, same-old. The Whiner-in-Chief even held what were basically super-spreader rallies around the country for several months in his failed quest for re-election. Thousands of people, most without masks, crowded together cheering him on. Now he touts a possible vaccine which won’t be available for months, but still refuses to do anything in the here and now.

Although Italy has had a surge, the graph at this point hints that it might be starting to level off.

2 Comments on “For All You People in the U.S. Whining About Wearing a Mask…”