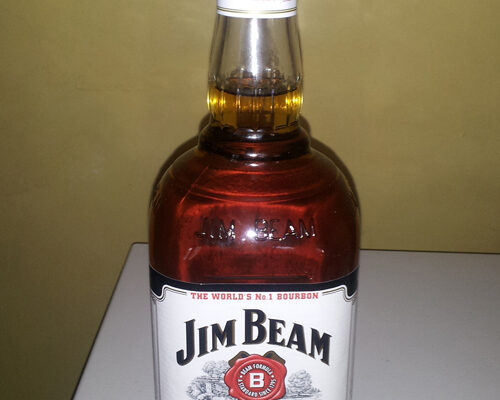 A couple of years ago, before we moved here to Italy, I wondered aloud (well, at least on Facebook) if I would be able to find my favorite drink, Jim Beam Kentucky bourbon, after we got here. I had no idea what kind of alcohol they sold or enjoyed in Italy — well, except good wine and Peroni beer, of course — so I was a little apprehensive that my bourbon cravings might no longer be able to be satisfied.

Then we arrived and went to the grocery store for the first time. There, in amongst the whiskeys, were several bottles of Jim Beam, and at a price only a tiny bit higher than I had been paying in the U.S. I breathed a sigh of relief. I could continue to treat myself to at least one small indulgence.

For awhile, everything was hunky-dory. I could buy my bottle of Jim every few weeks, and when the supply seemed to be dropping, the shelves would be restocked. Well and good.

Then one day I went to the store and the spot for Jim Beam on the shelf was empty. I’d heard there had recently been a fire at a Jim Beam warehouse, and I thought maybe that had disrupted the supply. There was another bourbon on the shelf — Four Roses — so I bought a bottle of that instead. When I tried it, it wasn’t bad. Not quite Jim, but pretty close. I was still happy.

Over the next few months, the spot for Jim not only never got restocked, but it disappeared entirely. But the Four Roses was always reliably there.

Until one day it wasn’t.

That’s been almost a year ago now. To substitute (without breaking the bank!), I’ve had to buy inexpensive house-brand Scotch. Which is okay, but it’s certainly not Kentucky bourbon. What happened to the bourbon, I wondered.

A little bit of research on the Internet quickly answered my question: the Trump Trade Wars.

As U.S. President Donald Trump has been attempting to implement his “make America great again” scheme, he’s been imposing tariffs on all kinds of imports. The most-publicized of these tariffs have been on Chinese goods, with China retaliating in kind. Less-publicized, but no less important, has been the ongoing trade war with the European Union.

In 2018 — just as we were leaving the U.S. and moving to Italy — Trump imposed heavy tariffs on U.S. imports of European steel and aluminum. In retaliation, the E.U. imposed tariffs on a number of U.S. goods — including Kentucky bourbon.

Bourbon sales to the E.U. plummeted, as bourbon simply became too expensive to import and sell. And, as noted, we bourbon drinkers who live in the E.U. have been forced to substitute lesser pleasures for our preferred form of indulgence.

This, I believe, is reason enough for you to vote against Trump in the November U.S. presidential election. Not only are his trade policies decimating the U.S. whiskey industry (and a whole bunch of other industries as well), but he is subjecting those of us who live in Europe to endure life without Kentucky bourbon.

That, to me, is the only reason you need to vote him out in November. (Please!!)