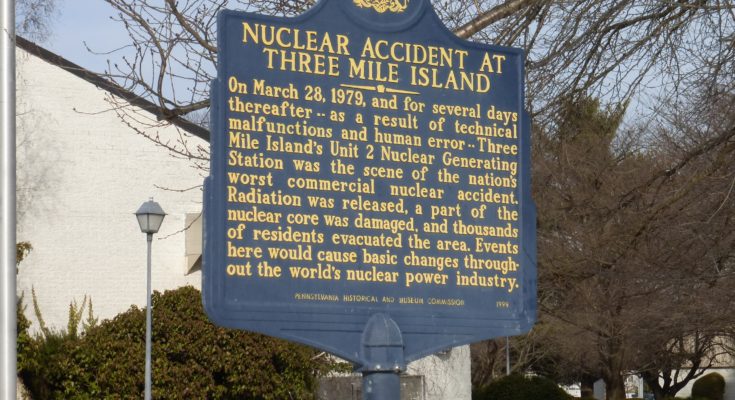 March 28th will always hold a special place in my life. It is the date of the Three Mile Island nuclear accident. This year — March 28, 2019 — is the 40th anniversary of the accident.

It holds a special place for me because I was there. I was a resident of Middletown, Pennsylvania, where the plant is located, so I felt all of the emotions that you feel when you don’t know if you’re going to live or die. And I was a reporter for a local magazine, who was thereby able to get “inside access” to everything that was going on.

As a resident, I felt the fear. Are we going to die? Have we already been so exposed that there is no going back? Should I evacuate? Will they force me to leave?

The accident occurred on a Wednesday. That Friday, as things were becoming critical, Pennsylvania Governor Dick Thornburgh called a press conference for the evening, around 8 o’clock. As I left Middletown to go to Harrisburg for the press conference, I packed a small bag: comb, toothbrush, change of clothes.

I did not know if, at his press conference, the governor would mandate an evacuation and I would not be able to go home again.

He did not mandate an evacuation. I stayed in Middletown. Almost everyone else in town left anyway. Middletown became a ghost town, its only “residents” the hundreds of reporters from around the world who converged on the area. I called my mother to let her know I was okay. She was worried, she urged me to leave. I told her I had to stay, I had to work — to get the story. It was a weird feeling, to be so much “after the story” that you’re willing to risk your life and your health. But there I was. I felt it — both the fear of dying, and the excitement of getting the story.

A few years ago I wrote another blog post about TMI, recounting a couple of the experiences I had. I got to attend a Presidential press conference. I wrote my first article for a national publication. I met the girl who would become (and still is) my wife.

As a reporter, I saw the fear in people’s faces. I heard it in their voices. I felt some of it in myself. I also saw a corporate spokesman stand at a microphone and lie through his teeth. Lies so obvious that the entire roomful of reporters basically shouted him down. Lies so obvious that even his superiors were embarrassed and relieved him of his duties. Lies so obvious that the government experts and “fixers” who had been dispatched to deal with the situation dictated, “No more corporate press conferences. From now on, all information comes from us.”

I saw those same government experts and “fixers” — the representatives of the federal Nuclear Regulatory Commission — being surprisingly forthright and honest. They were the government — instinctively, I didn’t trust them. And, yes, they tried to minimize the fearmongering and the worst-case-scenarios. But they were honest, they were thorough, and they spent all the time that was necessary — which was hours and hours and hours — explaining all the intricacies of how a nuclear plant operated and what had gone wrong here to hundreds of reporters who couldn’t tell a containment vessel from a pressure relief valve. Every day they stood in front of a roomful of reporters and patiently answered question after question after question, in as much detail as was necessary, in order to insure that what was reported were facts and not speculation. I was expecting a total whitewash, and what I got was — honesty. What a concept.

I met a woman who was a reporter for the Los Angeles Times. One afternoon, she and I were sitting in a bar in Middletown — the only business in town that was still open, filled only with reporters — having a couple of beers. A TV crew — I don’t remember from where — came in looking to interview any locals who still remained in town. For some reason, they came over to the Times reporter and asked her if she lived here. She decided to have some fun with them and told them that she did. They began asking her questions. She told them that her husband worked at the plant, that she was worried about his health, she was outraged that this could have happened…. She went on and on and on, laying it on thick and pulling it off admirably, as I sat beside her and tried not to laugh. The TV crew bought it hook, line, and sinker. When they left, we both cracked up. I suspect she was featured on the evening news somewhere that night, as the distraught wife of a Three Mile Island worker. I wish I could have seen it.

What really occurred to me today, though, as I was thinking about this anniversary, is what happened to me on the night before. The accident itself occurred around 4:30 in the morning on March 28th. But on the evening of March 27th, I was at the Lamp Post Inn, a local bar in Middletown, drinking and chatting with a guy named Ray, a college buddy of mine.

Ray and I had recently gone through college together at Penn State’s Capitol Campus, the local branch campus of Penn State in Middletown. Both of us had been involved in campus activities and politics. Mostly we had been on opposite sides. Ray was a Nixon law-and-order conservative. I was a McGovern liberal. Ray was on the student government. I was an editor of the student newspaper. On any number of issues, we had locked horns. Yet we remained friends. We could discuss and argue our politics for hours, but there would be no hard feelings afterwards.

We respected each other. We understood that people could differ in opinions, but still be people. We argued hard. On at least one battle I remember — whether the security police on the campus should be authorized to carry guns — we argued very, very hard and very, very publicly. It was a long, drawn-out battle. I won a journalism award for some of my reporting on the issue in the student newspaper. Ray’s side won the war: the security police were eventually authorized to carry guns.

But still, there were no hard feelings between us. Still, we could sit in a bar together on the night of March 27, 1979, downing a few beers and discussing, ironically, the safety of nuclear power.

Here again, we were on opposite sides. Ray advocated for more nuclear power, it was safe and would be “too cheap to meter” (as the early claims from the utility companies went). I was more cautious. There had been no serious problems yet (yikes, what a statement at that point!), but how can you guarantee its safety? And what about the waste?

So we had our little back-and-forth discussion, drank a few pitchers of beer, and helped close the bar at around 2:00 am.

We saw each other that day, and the conversation was along the lines of, “Holy shit! Do you remember what we were talking about last night?!”

But my point here at the end of this blog post is: Ray and I could disagree pretty vehemently on political issues. We were as different as, let’s say, Trump and Pelosi. We fought hard against each other in some pretty public political battles. Even when not in public, our discussions were often debates of one sort or another. We had very, very different viewpoints on most things.

And yet we remained friends. We didn’t demonize each other. We didn’t call each other names. We didn’t personalize the debates. We may have disagreed on issues. But when we debated — either in public, or in private — we stuck to those issues. The debate was not “Ray is an asshole” or “Ed is an asshole.” It wasn’t coming up with derogatory names like “Gun-totin’ Ray” or “Ed the Wimp.” The debate instead was on the merits, or lack thereof, of the issues.

And we remained friends.

I haven’t seen Ray since around that time in 1979. But I suspect that if we got together now, we would still be able to sit down together, have a few beers, and disagree about political issues without hating each other.

What’s happened to that attitude?

It seems to be far too lacking in the world today…