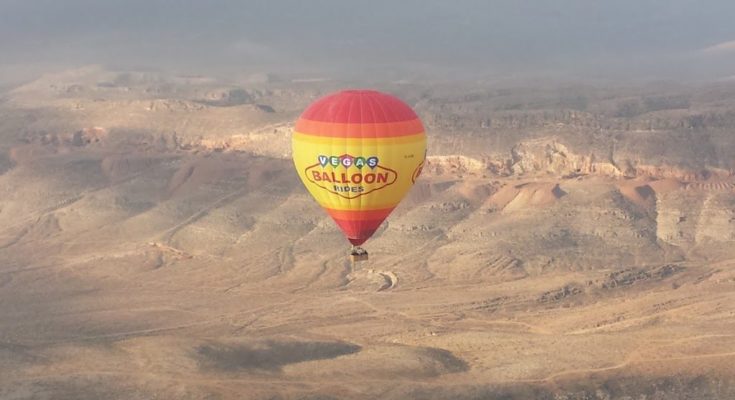 Flying in a hot-air balloon has been on our to-do list probably since the 1980s. But through all those years, for one reason or another, it never happened.

Most recently, this past summer (2016), we were all set to take a balloon flight over the lunar-like landscape of Cappadocia, in Turkey. Then, less than a month before our trip, the Turkish army decided to stage a coup which, although unsuccessful, caused us (and many others!) to cancel our Turkish travel plans. Once again, no balloon ride.

Then it happened. While planning a short getaway to Las Vegas for October, 2016, we discovered that, yes, we could also get a hot-air balloon ride while we were there. We decided to go for it.

We booked the ride with Vegas Balloon Rides — not to be confused with Las Vegas Balloon Rides, a competitor company trying to play off Vegas Balloon Rides’ popularity and reputation. The ride cost about $200 per person. It included pick-up from our hotel, training/orientation, a flight of about an hour, champagne cocktails at the end, and a ride back to the hotel.

Because the best time for flying is around sunrise, this flight calls for an early start — the company van picked us up at Circus Circus on the Strip at about 5:00am. Then it was off to the company offices, stopping at a few other hotels to pick up additional passengers along the way. At the office, we were given a safety briefing, then we loaded into two vans, each towing a trailer with the balloons and other equipment. Each van carried the pilot and passengers for one of the balloons.

When we arrived at the launching site on the outskirts of Vegas, there was a bit of a snag. Turns out we had hit one of the few weeks of the year when it had actually rained in Vegas, the humidity was high, and the sky was filled with low clouds. The balloons could not launch in these conditions. Were we going to be denied our flight once again?

But the pilots told us not to worry. The forecast was for the clouds to begin to lift and dissipate, so they thought we’d be able to fly in an hour or so.

We waited patiently. The pilots were in touch with the airport control tower, who relayed weather information to them. Periodically, they let loose a small helium-filled balloon to watch it rise and count the seconds until it disappeared. This told them how high the clouds were. In between, they amused us with jokes and small talk.

Finally, around 7:00am, they decided we were a “go” and began pulling the balloons out of the trailers. About a half-hour later, the balloons were inflated, the safety checks completed, and we were all aboard.

Then we were off! The ride was amazing — calm, quiet, and peaceful, with the only real noise being those times when the pilot ran the burner to heat the air and gain more altitude. The two balloons traveled together across the Nevada desert on the outskirts of Vegas. Our altitude varied between about 3,000 and 5,000 feet as we rose and fell gently. Sometimes we were above our sister balloon, sometimes below. The ride was so calm you almost didn’t know you were flying, except for the grand, panoramic view.

Along the way, our pilot pointed out various points of interest on the ground: an old abandoned mine, for instance, or what was left of a car that had driven over a cliff while running from the police years ago.

The pilots also had a running bet. At some point during the ride, the other balloon would pass over ours, and its pilot would drop a large rag. The bet was whether or not he could land the rag on top of our balloon. On this occasion, he missed. Better luck next time!

After about an hour, the pilots began easing us down toward the landing spot in a large, flat open area designed to catch flash flood runoff. The vans (in contact with both balloons by radio during the entire flight) were there to meet us. Part of our initial training was in how to brace ourselves for landing, because there is always the possibility that the basket could hit the ground, drag too quickly, and tip over. On our landing, we tipped a little, then a little more…. then settled back upright, steady and stable. We debarked from the basket, and the pilots began deflating and disassembling the balloon.

With the balloons and gear packed back up into the trailers, it’s time for the final ceremony: champagne cocktails all around. Then a ride back to the hotel.

This was an excellent experience — something we’ve wanted to do for a long, long time, and well worth both the price and the getting up at around 4:00am. The pilots and crew were experienced, professional, and fun. And the experience itself is something that you simply can’t get any other way.

If you’re going to Vegas and you want a great experience you’ll never forget, you can book your own hot-air balloon ride. It’s something that the entire family will enjoy. Each gondola (basket) holds about 16 people, so everyone can fly together. On our flight, there were about 10 people in our balloon. Very comfortable, and lots of room to take great pictures.

For something a bit more exotic, if your travel plans include Turkey, you might want to try a balloon ride over the amazing and mysterious landscape of the Cappadocia region.