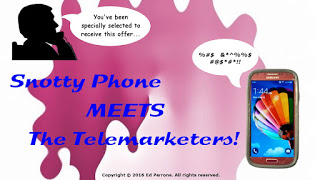 You’re familiar with Snotty Phone, correct? If not, you need to check out Snotty Phone’s first video (click the image), because it will give you some context for the story you are about to read.

As you can tell from the video, Snotty is not particularly fond of telemarketers — although she does like to have fun with them. But sometimes a telemarketer — or in this case, a flat-out scammer — puts a little twist on things.

Maybe you’ve gotten a call from people posing to be the IRS. The automated call tells you that you are behind on your taxes, and that the IRS is getting ready to file criminal charges against you. The call can sound quite threatening, and for people who don’t know how the IRS works (they do not make threatening phone calls, they send you a letter in the mail), or for people who may actually be behind on their taxes, these phone calls can scare you into pouring out your confidential financial information to complete strangers.

But the “IRS” people have a little twist in their phone calls. Instead of telling you to “press 1 to speak to an operator,” as most telemarketing calls do, this call simply gives you a callback number, then hangs up. In other words, they want YOU to call THEM so they can scam you.

Snotty Phone would love to get her hands on these guys. But the first couple of times they called, we were not at home, so we only got the message on our answering machine. And by the time we were able to actually call them back, the number had been disconnected.

Then a couple of days ago we got lucky. The phone rang. It was the “IRS,” once again threatening to file criminal charges against us. The recorded message went through the whole spiel and provided the number to call back: 202-360-4612. (A number in Washington, DC — nice touch.)

This time, Snotty and I were on it immediately. As soon as we hung up the incoming call, we dialed the number provided. It couldn’t be disconnected yet, we reasoned.

One ring. Two rings. Someone picks up the phone. We hear a voice saying a couple of words in the background… and then the phone is hung up.

What?! You call a scammer back, virtually begging to give them your financial information, and they hang up on you?

Must have been a mistake. Maybe they didn’t have their script ready, so they needed to get organized before answering. We redial. This time, they don’t even pick up the phone. We are simply disconnected after a few rings.

We wait an hour or so, then try a couple of more times. Same result.

I don’t get it. How are these guys supposed to scam you if they don’t even answer their phone? Did they flunk out of Scammer University or something? Are they just complete idiots?

I must tell you, Snotty and I were pretty disappointed. They laid a great opportunity right in our laps, then just snatched it away from us.

I can promise, though, the next time they call we will be all over them. And maybe it will be a different group of scammers who know they actually have to answer their phone if they want to make any money at this scamming game.