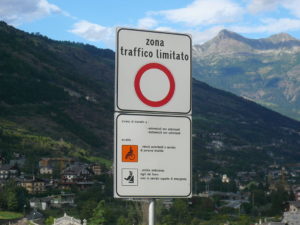 If you are driving in Italy, you will obviously need to be aware of some of the rules of the road. One of these rules — which snares innumerable foreign tourists every year — is the “limited traffic zone.”

The limited traffic zone is an area, normally in the heart of a city, where casual traffic is prohibited. Only vehicles with a valid permit — such as delivery vehicles, emergency vehicles, and vehicles owned by residents of the area — are permitted to drive in these zones. Any other vehicle is illegal and will incur a (usually hefty!) fine.

Most Italian cities and towns have these zones, which are designated as “ZTLs.” ZTL is an abbreviation for “Zona a Traffico Limitato,” which means “limited traffic zone.” They are designed to help prevent downtown traffic congestion, as well as to keep motor vehicles and their damaging emissions and vibrations away from delicate buildings, which can be 1,000 years old in some areas.

The ZTLs are clearly marked, but you might not see the signs if you are distracted or not familiar with Italian traffic signs. The zones are enforced with cameras that capture a photo of your license plate as you enter the restricted area. If you are driving a rental car, the local police will contact the rental car company to obtain your name and address — and the rental company will charge you an additional30-50 euros for the “service” of providing your information to the police. These charges can show up months after you’ve returned the vehicle and left Italy. Look at your rental vehicle contract — in most cases, it will specifically state that they can do this.

Then, sometimes as much as a year or more after you’ve left Italy, you will receive a traffic ticket in the mail instructing you how to pay your fine. On our trip to Pisa we received two such tickets, with the fine on each being 125 euros. The times of the two violations were only 4 minutes apart, and they were on the same street. Apparently as we were looking for a parking spot, we went around the block and unknowingly violated the same ZTL twice.

Whether or not the city actually attempts to collect these fines varies from one city to another. We understand that Florence and Pisa are among the most aggressive in attempting to collect the fines from foreigners. Other cities may simply ignore the violation when they discover you are a foreign tourist, and you may never hear anything about it. (Or, more likely, you are charged by the car rental company to provide your information to the police, but then you never receive an actual ticket.)

If you are driving in Italy, it is well worth it to be aware of the ZTLs, and to respect them. Ignoring these rules can be a costly mistake.