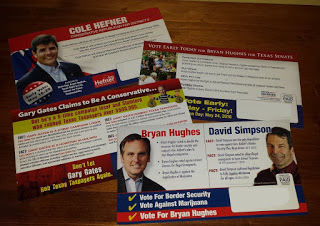 Here in Texas, we have a runoff election coming up next week. That means this week we are innundated with mailings and telephone calls from candidates trying to out-conservative each other.

I would note that the telephone calls might not be a problem, except that the politicos have exempted themselves from the state no-call law. Thus, politicians are free to badger you with spiels both live and recorded, as well as with robo-call automated “surveys” which, I suspect, are designed not so much to solicit your opinion as they are to guide your opinion in a specific direction. (I say “I suspect” because I have never gotten to the end of one, I hang up during the first question.)

In any event, the candidates’ posturing would be kind of amusing were it not so pathetic. “I’m more conservative than you are!” is pretty much the theme of every advertisement.

There is even a guy running for Texas Railroad Commissioner whose name is “Christian.” I kid you not, Wayne Christian. Do you think he’ll get the Christian vote? Is that a pseudonym he took just to run for office? Is he even a Christian?

Anyway, it’s kind of annoying and kind of funny at the same time. As for the issues, as near as I can figure it, they are saying that we need to build a wall around all public restrooms, because illegal immigrants are taking stalls from native-born citizens who need to pee. And those illegals are threatening, too. Would you want your daughter in the same restroom with an illegal immigrant who has a driver’s license and who utilizes the services of Obamacare and Planned Parenthood?