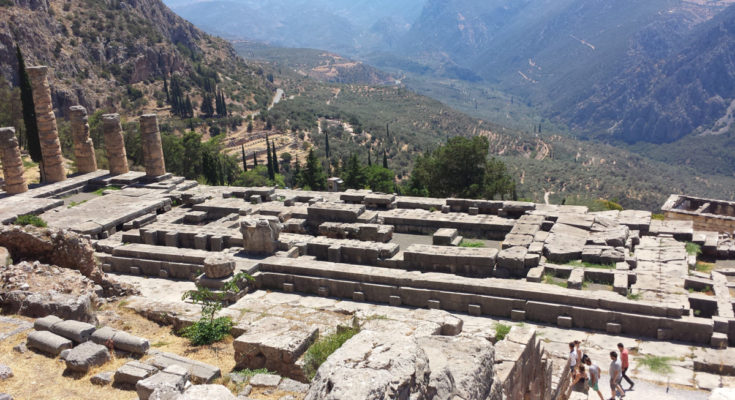 Some places just have a vibe about them. You can feel it when you go there. It’s in the air — or something. There’s just something special about the place, something perhaps a little other-wordly, something….

This is how “sacred places” become sacred.

Last month during our trip to Greece, we visited Delphi, site of the famous Oracle. Delphi has a vibe to it. It’s been a sacred site since as far back as the 14th century BC, and you can feel it. The vibe is subtle, yet powerful. It can be (and probably often is) overpowered by the hustle and bustle of the modern world, by the diesel exhaust of the tour buses, by the buzz of hundreds of tourists flitting about snapping selfies and pictures of ancient ruins… 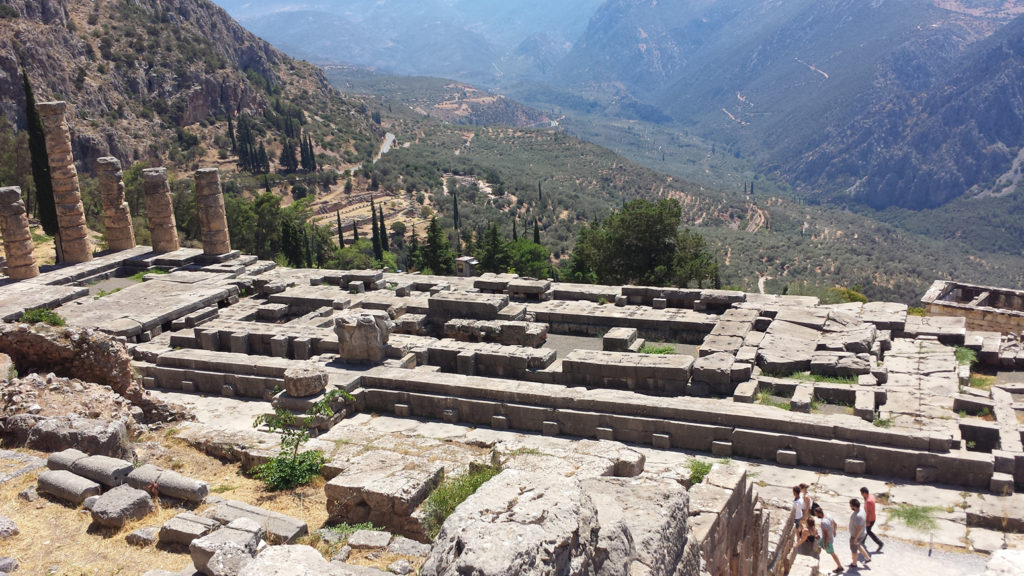 While we were at Delphi, I managed to shake off the tourist crowds for a few moments. Or, more accurately, the crowds went off in search of some other momentary pleasures, while I lingered almost alone at the ruined-yet-still-massive-and-impressive temple of Apollo. I tried to imagine what it might have been like 3,000 years ago: some people coming to offer tribute to the god, others coming to query the Oracle about some upcoming venture, perhaps some singers preparing to perform in the theater or athletes preparing to compete in the stadium. 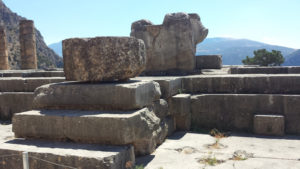 I walked slowly around the temple and came to the spot where our tour guide had said the Oracle actually sat when she made her prophecies. I stopped, in contemplation. It was surprisingly quiet around me — almost everyone else had gone away.

This was a sacred spot. In the quiet, I could feel it.

As I stood pondering, I began to experience a sense of insight — almost as if an idea or feeling was being placed into my mind. It was a positive, calming feeling, which eventually translated into the words, “You’re on the right path.” This made me feel good in a very unique way: It provided reassurance that everything was going to be alright, while it also instilled in me the confidence that I’d be able to handle any challenge that might arise. I guess more than anything else, it helped to remove doubt.

But… where did this idea, these words, come from?

I decided they had come, through the Oracle, from Apollo himself.

As if as a sign, I suddenly noticed that the god had placed a small talisman in front of me, upon one of the stone platforms that in ancient times had led to the Oracle. I retrieved the talisman, held it for a minute, felt the vibes emanating from it. It would keep the god, his protection, and his power close to me. I felt grateful. I looked around. There was another talisman, which I retrieved for my wife. These were special objects from a special place.

As I began to look around for still another talisman, words came gently into my mind: “Don’t be greedy.” I sort of smiled to myself as I realized that, yes, I was beginning to get greedy. But I accepted the god’s suggestion and decided to be satisfied with, and thankful for, the good fortune that was already mine.

As I began walking away, I realized that this apparently minor incident was actually having a rather profound effect on me. I can be a bit of a mystic, yes, but I’m not really one given to hearing voices. But here I was at a place where a god has been speaking for thousands of years, and simply by quieting my mind for a few moments, I could hear him, too.

Then, just a few days ago, I came across something rather astonishing.

I was reading about Delphi, and the article said that in ancient times there were two maxims carved into the entrance of Apollo’s temple. One maxim said “Know thyself.” The other said “Nothing in excess.”

I did sort of a double-take as I realized immediately that “don’t be greedy” is essentially “nothing in excess” in other words.

My experience at the temple was validated. I had no earthly clue that the phrase “nothing in excess” was an important factor in Delphic wisdom and ritual — so important that it was actually carved into the entrance of the temple itself. Yet that is the exact concept that was given to me as I stood contemplating at the temple.

Not only is the site sacred, but it is consistent in its teachings.