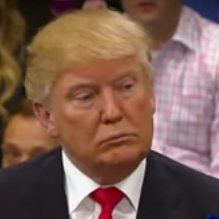 I am no fan of Donald Trump. But the man has the right to express his opinion just as much as you do. So do the people who agree with him and support him.

If you disagree with Trump, fine. Organize a protest. Write letters to the editor. Post on social media. Speak out in public. You, too, have the right to express your opinion.

Or do you only believe in freedom of speech for the people who agree with you?

“I disapprove of what you say, but I will defend to the death your right to say it.” – Evelyn Beatrice Hall

I am sure you’ve heard that quote. I suspect you think you believe in it. But do you?

Browsing Facebook, I am kind of surprised at some of the people I see applauding the thugs who are causing trouble at Trump rallies. “Let’s shut ’em all down!” they say. Really? Shut ’em down? I thought I knew these people, but this is a side of them I wouldn’t have expected. I thought they were smarter than that.

My wife once said that when people start posting about politics on Facebook, you find out who they really are — and sometimes it’s stuff you really don’t want to know. You’ve always seen them as nice people. Then they let loose on Facebook, and you glimpse the real jerk behind the facade.

You would have remained much better friends had you not known…

So: Let’s just role-play here for a minute. Let’s say that you personally are giving a political speech. I disagree with what you are saying. I disagree vehemently and passionately with what are obviously your narrow-minded, idiotic remarks. So I jump up on the stage and try to tackle you. I want to shut you down.

At the same time, some of my friends (who also disagree with you vehemently and passionately, etc., etc.) start attacking your supporters in the audience.

How do you feel about that? What do you call me? How do you describe what I did to you?

Do you get it yet?

I remember when the American Nazi Party wanted to hold a march in Skokie, Illinois. No less an organization than the American Civil Liberties Union (ACLU) — a group that finds Nazi principles abhorrent — defended them in court. The Nazis, they said, had as much right as anyone else to express their opinions in a peaceful fashion.

The ACLU was right. The U.S. Supreme Court agreed. The First Amendment applies to everyone, whether you personally like what they are saying or not.

“I disapprove of what you say, but I will defend to the death your right to say it.”

I don’t particularly like a lot of what Donald Trump has to say. But I certainly think he has the right to say it. And I think anyone who would try to shut down or disrupt one of his rallies is, in essence, their own version of a Nazi.

What do you think? Should you perhaps take a long hard look in the mirror…?

2 Comments on “Freedom of Speech and Donald Trump”