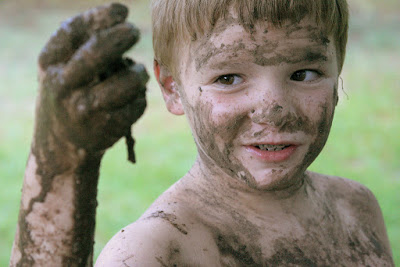 When I was growing up, we lived in the country, right next door to my grandparents. I remember one day when I was only about five or six years old, Mommom and I were in her back yard.

It was late in the afternoon, and we must have been the only two around, because we were preparing to have our own little cookout. I don’t know where everyone else might have gone, but for this it was just her and me.

The barbeque grill was actually just a few cinderblocks piled on each side of the fire area, holding up a wire grate that you could cook on. Mommom had some hot dogs, we built a little charcoal fire, and soon we were ready to cook.

But I didn’t want to cook my dog on the grill. I wanted to “rough it,” so I found a small stick, rubbed the end of it on the cinderblocks to sharpen it a bit, and stuck it through my hot dog to use like a skewer. Proudly, I held the dog over the coals and it began to cook.

Unfortunately, I guess I had not stabbed the hot dog thoroughly enough, because in just a minute or two it fell off of the stick and into the coals. I remember being very upset and crying very loudly. Mommom retrieved the dog for me, brushed off most of the ash, and gave it back to me to finish.

I was still crying.

“Why not?” Mommom asked.

There were still some black smudges of charcoal on the dog. Not much, but apparently enough to make me think it was filthy and unfit for human consumption.

“Oh, come on,” Mommom said. “You have to eat a little bit of dirt every day just to stay healthy.”

I stopped crying and sort of looked at her quizzically.

Suddenly I was happy again. That little bit of dirt wasn’t so bad after all. In fact, it was good. It would help keep me healthy.

I decided right then that I would eat a little bit of dirt every day, because I wanted to stay healthy.

Actually, for many years after that, I often quoted Mommom when the occasion gave rise to it. “You know, my grandmother told me once that you have to eat a little bit of dirt every day just to stay healthy…” I believed that fact implicitly. There was no doubt about it in my mind. After all, Mommom told me.

I was probably 40 years old before the thought first occurred to me that maybe — just maybe — she had simply made that statement up on the spot so as to stop me from whining.

Could it be?? Nahhhh… She wouldn’t do that….

After all, you told them.

But… then another thought arises. Mommom may well have known what she was talking about. After all, ingesting a small amount of foreign substances every day is likely to help build up the antibodies in your system. Over time, it will probably help make you more resistant to disease and illness.

I mean, we’re not talking here about gobbling down massive handfuls of topsoil. We’re just talking about not being 100% sterile all the time. So there’s a little bit of ash on the hot dog. Big deal, it’s not going to kill you. That sort of thing.

It makes a lot of sense to me. In fact, I suspect a lot of the illness prevalent today can be traced to people’s attempts to be too clean and sterile. They make a point never to encounter a germ. Then when they do, even the most otherwise-harmless germ can lay them flat.

Like I said, my grandmother told me once that you have to eat a little bit of dirt every day just to stay healthy….