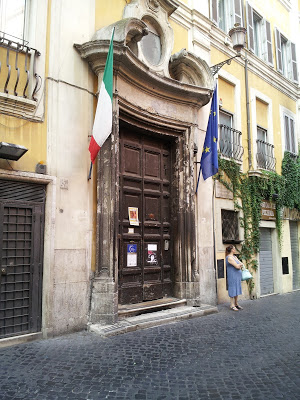 I called this category “Adventures in Italian-ness,” but I’m not 100% sure what I’m going to post in it. I’ve been Italian all my life, and I’ve had some adventures — even some adventures related to being Italian. (Hmmm… A good story comes to mind. Okay, now I know what’s going to be another post….)

But I put the category here mainly because recently my Italian-ness has taken a new and unexpected turn.

I have always been one of those hyphenated “Italian-Americans.” Our parents or (mostly, for my generation) our grandparents came over to this country from Italy, and we were raised with one eye toward our heritage in the “Old Country” and the other eye toward the future in this country.

But just a couple of months ago I followed a link on a website and discovered that I was actually a bit more than “Italian-American.” Under the laws of Italy, I am legally an Italian citizen.

No one ever told me this. They may not have even known. When you emigrated to another country in those days, you were pretty much cutting all of your ties. You couldn’t just jet back for a quick visit with the family who remained behind. So the esoteric legalities of citizenship probably didn’t mean a whole lot, even if they did know. They had settled here, they had become U.S. citizens, anything else was irrelevant.

But for me, in the 21st century, the possibility of dual citizenship is a revelation and opens up a massive number of opportunities. It is exciting. It is likely to lead to even more adventures.

The first adventure is actually the claiming of my citizenship itself. Even though I have technically been an Italian citizen since my birth, I now have to gather together the documentation to demonstrate this to the Italian government. (Just like when you apply for your U.S. passport, you have to bring them your birth certificate and other documentation to prove you that you are indeed a U.S. citizen.)

So now I am collecting up all of that documentation, having it certified, having it translated into Italian, etc., etc., etc. From what I gather from others who have been down this road, it will take some months to get this all together, and probably will become its own adventure. Then I will need to meet with the officials at the Italian Consulate in Houston to have them go over this paperwork. If they find it all in order, they will officially recognize my Italian citizenship, and I will be officially a dual citizen.

And then the real adventure will begin…..