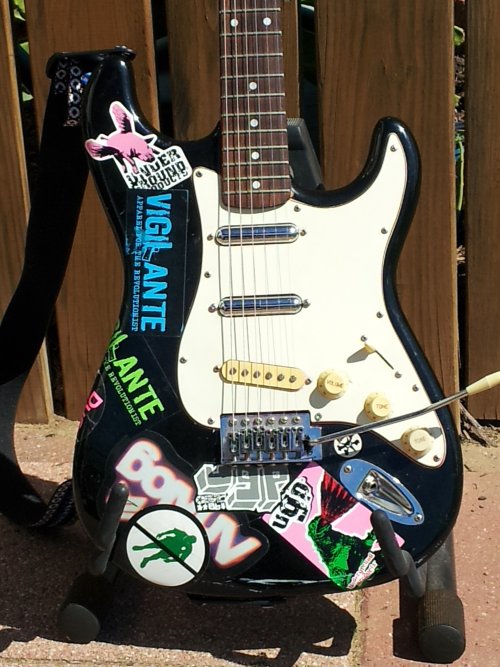 Whammies and surfers and lipsticks, oh my!

Okay, I admit it. The main reason I bought this guitar was because it was dirt cheap. And also because it had a whammy bar. I’d never really worked with a whammy much, and I wanted something cheap and “expendable” to experiment on.

I ended up getting more than I bargained for (as I’ve found you often do with these inexpensive and/or old guitars). In addition to a dedicated “whammy” guitar, I discovered that the bridge pickup on this guy is perfect for playing old surf-style and psychedelic rock — even better than my mainstay Ibanez, which can play just about any style or tone I ask it to. But the Ibanez has a humbucker at the bridge; and its two single-coils, although close, just couldn’t match the authentic “honk” from this Indiana’s bridge single-coil. I discovered this quite by accident: While fooling with the Indiana one night, I started playing “Walk, Don’t Run,” and my jaw dropped at the sound that came out of the amp. Spot on tone! (I discovered later that it does a pretty darned good imitation of late-60s/early-70s Jerry Garcia as well….)

This ability to play a tone that no other guitar in my arsenal could play immediately kicked the Indiana several notches up the pecking order. It was certainly no longer “expendable.” Now it had a real purpose in life. But I was a little disappointed with the other two pickups, which sounded kind of bland. Until one day, an idea was born…

If this is going to be the surf/psychedelic guitar, let’s buy a couple of lipstick-tube pickups and replace those two bland single-coils. So that’s what I did. (And I managed not to wreck the guitar while changing them out.) They sound pretty good, although I’m not yet sure if they have anything really “unique” to offer. We shall see….